SERVE NEWSLETTER Live as a Sent One

Live as a Sent One

Christmas is a season to remember your God-given mission.

We can easily turn Christmas into a selfish season. “What will I put on my wish list? How can I be sure to make Christmas in 2021 the best one ever?” It’s natural to want to reward yourself after a year of hard work. It’s easy to excuse your selfish desires when you get out of your normal routine. To combat this selfish tendency, consider the fact that just as He sent Jesus into the world, so also, He sent you to carry on His mission.

Christmas is about God’s mission.

Christmas is a celebration of the Father’s love in sending His Son. The baby in the manger was the gift of God to the world (John 3:16). He sent Jesus not “to condemn the world, but that the world through Him might be saved” (John 3:17).

The Father’s sending of the Son demonstrates that God is carrying out His mission. Over the history of His work recorded in the Old Testament we see Him sending angels and prophets to do His work. Ultimately, He sent His Son to reveal Himself to the world (John 1:18) and to complete His work. That mission continues today through you and me. Jesus prays in John 17:18, “As You sent Me into the world, I also have sent them into the world.” Further, in one of Jesus last recorded meetings with His disciples, he said, “As the Father has sent Me, I also send you” (John 20:21).

Friend, you are a sent one. You have God’s message of salvation. Are you living today as one who is sent?

Five ways to live as a sent one

I urge you to consider these five practical ways to strengthen your resolve to live as one that is sent.

4. Use your time wisely to accomplish your mission effectively. Time is given to you by God to use for His glory and His purposes. Of course, rest and rejuvenation are important to maintain good health and a strong mind, but don’t fall into the trap of wasting hours of your days for selfish purposes. Set limits for sleep and relaxation and connect with God daily through prayer and time in His Word.

5. Have weekly objectives that contribute to your mission. This is one practical way to fulfill #4. Take a time every week to plan out the week ahead. Set weekly goals and set up times to accomplish those goals. At the same time, don’t fret over lost opportunities or unmet goals. God is full of grace. Ask for His help to make each week as good as you can for accomplishing His mission.

As you consider these practical suggestions, pray and ask the sending God for strength to make this Christmas a God-focused Christmas instead of a selfish one. 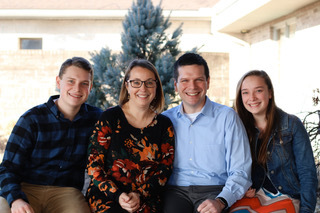 Administrator for Church Relations and Enlistment

Travis Gravley & his wife Becky are former missionaries to Romania. He serves as BMM’s Administrator for Church Relations and Enlistment. Contact him at tgravley@bmm.org to learn more ways to serve.