Carlos was an intelligent and effective lawyer who could get things done. His connections made it very probably he would rise to the top of the political arena of his city in Peru. He had professed faith in Christ, and he and his wife were leaders in their church, but their life revealed the opposite. His religious church life, fervent ambition, gifted abilities, and political connections did not help him find peace or satisfaction in life.

The first crack in his image that revealed needs in his life was his young adult daughter’s downward spiral. She had been searching for meaning in life but ended up in the wrong places. In her teen years, she plummeted into anorexia. Although she was skin and bones, she saw herself in danger of gaining weight if she ate.

Her health deteriorated to the point of threatening her life. She was seen by numerous psychologists, therapy specialists, nutritionists, and counselors, and she was admitted for emergency health care in hospitals over and over. She complied only long enough to convince others she could be released. Once out, she returned to her old habits.

But it did not stop with anorexia. She turned to alcohol, tobacco, the wrong friendships, and pills. She started cutting herself, and her chronic condition became even more critical as her body teetered on collapse. The emptiness was haunting and nothing filled the void. She tried to take her own life with pills only to be rescued in the nick of time. Several days later when she regained consciousness, she was disappointed and couldn’t understand why she didn’t die.

Carlos and his wife, Eglie, were desperate. But instead of turning to Christ, they turned on each other. The crisis revealed serious conflicts in their marriage, producing red-hot arguments mixed with ice cold distancing.

It was during this time that they learned about BMM missionary Stanley Templeton through his radio ministry, Red Radio Integridad. Desperate for help, Carlos and Eglie attended one of his church services and sought counsel afterward. By this point, the doctors and psychologists had long given up hope of any change in their daughter.

The conversations with Stan were long and numerous. They began with Carlos and Eglie’s concern for their daughter.Then over time, the conversation turned to their own marriage, which was approaching the breaking point.

Over the space of several months, Eglie came to understand that, even though she had been a leader in their previous church and truly believed she was born again, the Word of God revealed to her the opposite. It became obvious to Stan that all three did not know Christ, so the topic would always turn to salvation. As Eglie read her Bible and heard the gospel explained, she quietly understood and was saved.

However, instead of things getting better, her conversion produced greater friction. She found herself thinking totally differently while her husband and daughter sided together. Eglie would lovingly talk with her daughter and point out her sinful habits and her need to trust Christ as her Savior. As she resisted and turned to more sinful habits, her health deteriorated even further. Carlos blamed his wife, believing she was too strict on their daughter and only heaped guilt on her.

While Stan continued to share the life-changing gospel message with both the daughter and father, the mother began to lecture less and serve more while praying intensely for their salvation. The weeks became months that became years. The long, slow drag on the daughter’s health, many prayers, and the steadfast love of Eglie drew her daughter to the One who loved her the most. Her daughter was converted, and her life took on meaning for the first time. Her health and her life were transformed into joy and hope that only Jesus can give.

Held back by pride

None of this helped Carlos in his marriage or his ambition. He strongly believed he was fine, and in his eyes, it was now two against one as his wife and daughter both urged him to come to Christ. Things got worse as God closed in on him. His political career and opportunities dried up, and serious issues emerged in his extended family. Hounded constantly by depression and despair, he turned to alcohol. Realizing this was taking him down the wrong path, he determined he would stop—only to find he couldn’t.

As his life unraveled before everyone’s eyes, he meticulously worked hard at impressing others and looking good while knowing everything was ugly on the inside. It was exhausting to maintain this false image. It became obvious to him that the problem was not his wife, his daughter, his dashed ambitions, or his image. Carlos’s problem was with Jesus.

In his own way of thinking, coming to Christ meant acknowledging that he had been wrong all this time. He thought his pride was what was keeping him standing, but the truth was that pride was bringing him down. After seven years, when he finally could take it no longer, he humbled himself and came to Christ. It was pure relief to let his pride and image go. Before, he thought his image would go up in smoke if he admitted he was a sinner and not saved. But what went up in smoke was his sin. The joy and peace could hardly be explained, but it was certainly evident.

The family is now complete in Christ and are faithful and active members in their church. All three sit on the very first row in all the church services. Whenever there is a need in the church, they are the first to serve. Carlos loves his wife and wants others to know Jesus instead of knowing how important he is in society. The difference is astounding because Jesus is amazing! He is the only one who can changes lives like theirs. 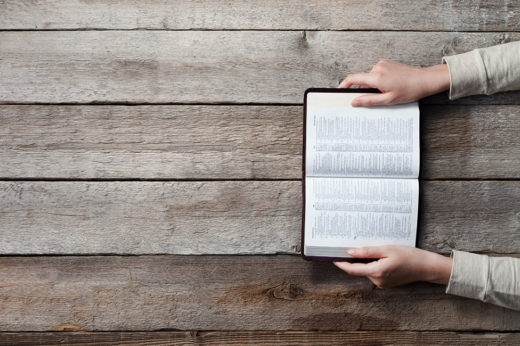 The Lord is using divinely arranged conversations to help Jim and Becky Carlton find Peruvian people groups that need the Bible in their language.

Domingo was slowly going blind. This only intensified the hunger in his soul as he searched the radio for something more than music.