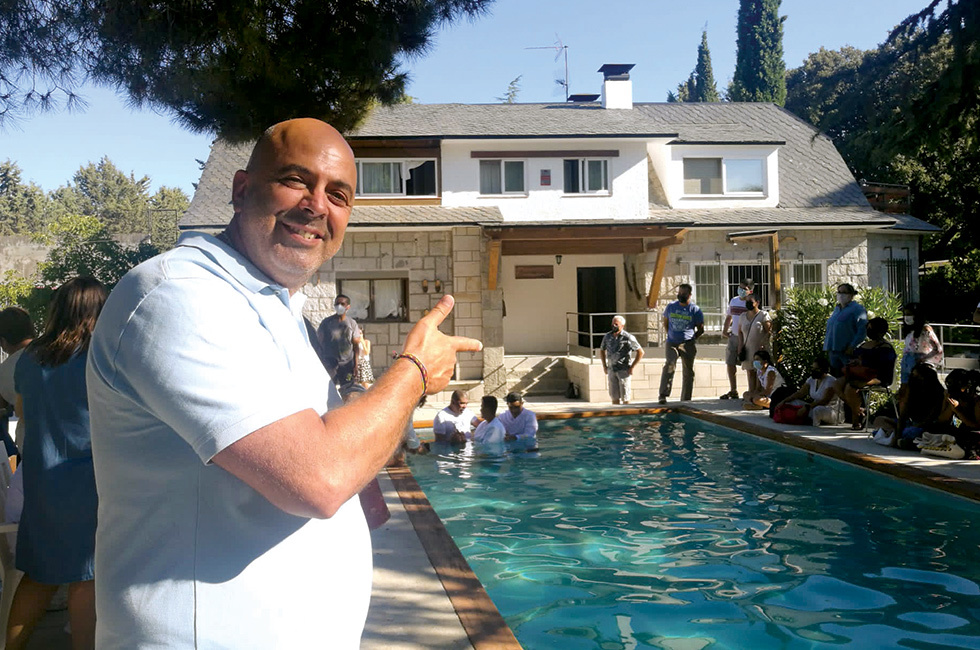 The Fountain of Life

The year was 1995.  A young man in his late 20s approached the door of a small Baptist church in Madrid, Spain.

He had spent months in the throes of drug addiction, trafficking in the ghettos with those whom the world would discard on a whim. Now recently released from a drug rehabilitation center in Barcelona, he was hoping to start life anew. He pulled open the church door, stepped inside and introduced himself to Kent Albright, a BMM missionary.

Although he thought he was a Christian, as the two studied through the Scriptures in the weeks that followed, it was clear that he was unfamiliar with basic biblical Christianity. Everything they studied about God, Jesus Christ, man, sin, and salvation—all of it was brand new to this young man. The Holy Spirit began to open his eyes, and he saw his need for salvation. Soon by faith he embraced Jesus Christ and was born again! As he grew in faith, he was reconciled to his former girlfriend and their 4-year-old son, and they were married. In 2003 he graduated from the church’s Bible institute.

Burdened by those lost in the drug world, this couple now directs and manages a drug rehabilitation center known as Fuente de Vida (Fountain of Life), which includes a large store and two residence facilities for men and women as they recover and grow spiritually. Over the last 15 years, more than 300 men and women have come from the dark ghetto barrios and the underworld of drug addiction into the light of the gospel of Jesus Christ.

Invest in the Global Impact Fund of Baptist Mid-Missions, and you will serve missionaries, like the Albrights, sent to souls who wait in darkness. Your gift will support and enable God’s messengers. Your sacrifice will touch every sermon, every loving deed, and every explanation of divine truth. Your global impact starts with a gift and a prayer to touch one life. But as your gift is given, and as one redeemed life touches another with God’s love, your global impact multiplies exponentially.

Please prayerfully consider making a generous gift today—your stewardship investment in reaching with the gospel those whom the world is discarding on a whim.

How will you invest your life?

“The effective, fervent prayer of a righteous man avails much.”

“For whoever gives you a cup of water to drink in My name, because you belong to Christ, assuredly, I say to you, he will by no means lose his reward.”

“Go into all the world and preach the gospel to every creature.”

Through BMM Foundation’s Memorial Fund, you can give a lasting legacy by donating in memory of a loved one or in honor of a special occasion. Gifts made to the Memorial Fund are invested and are used to provide services to missionaries, churches, and ministry partners. Give … an investment that goes ahead of you into eternity