If we compiled a list of fields most responsive to the gospel, Brazil might easily rank highest. But that wasn’t always the case. Our pioneering missionaries surmounted incredible barriers to create openings for the gospel.

In the early years, BMM missionaries across Brazil faced persecution from those who saw their message as a threat to their religions. In some places, missionaries were slandered and threatened, and meetings were disrupted by angry crowds armed with stones. One missionary was beaten by mobs on at least two occasions. One of the most dramatic stories came from Barbalha in northeast Brazil. The city is located near Juazeiro do Norte, one of Brazil’s most religiously fanatical cities. To this day, many of its people worship Padre Cicero, a deceased Catholic priest they believe to be the Messiah.

In 1940, our early missionaries were intent on entering Barbalha, but a mob disrupted their services and they couldn’t establish a church. In 1950, Harold and Ruth Reiner, Mary Mills, Charles and Martha Hocking, and Tom and Evelyn Willson tried again. One evening, a mob disrupted the meeting they were holding in a house. After two hours of bombardment, the crowd broke down the gate and entered the house. The mob threw rocks and smashed furniture. Everyone at the service received injuries, but miraculously no one was killed or even seriously injured. In the months that followed, many in Barbalha waged a fierce war against the missionaries’ efforts. Men painted a slogan on a building near the city’s entrance: “Halt, Messrs. Protestants! Barbalha of St. Anthony is already evangelized!” More missionaries met the challenge, and the gospel prevailed. In the 1960s, a church was organized in Barbalha that has become a solid testimony for Christ.

In 1997, Tim Reiner, son of Harold Reiner, was serving in Fortaleza, a city about 300 miles from Barbalha. Tim was involved in constructing a large ministry complex that would house BMM’s Brazil headquarters, Fortaleza Academy MK school, and other facilities. Out of four construction firms, the one chosen was owned by Dr. Ricardo, who was discovered to be the son of the man who chose the slogan painted in Barbalha.

From the start, the missionaries and Brazilian believers prayed for Dr. Ricardo’s salvation. They offered the workers free Bibles and held special meetings on the construction site. Dr. Ricardo allowed his men to stop an hour early to attend an evangelistic meeting where up to 140 crew members listened attentively to God’s Word.

In 1999, the inauguration ceremony was held. Tim honored several key people with gifts of appreciation. After receiving his gift, Dr. Ricardo nervously asked if he could say a few words. Before an audience of 300, he said, “This is not the largest construction project we’ve built, but it is the most important. Pastor Mauro and Pastor Timoteo [Tim Reiner] have spent much time in the Bible with me. Through them, my wife and I heard about Christ and salvation. Almost two months ago, my wife came to know Christ as Savior. I am here before you tonight to tell you that I was blind but now I can see. I was dead, but now I am alive!”

Surrounded by the beautiful, newly constructed buildings, Tim felt as if none of it was as significant as the salvation of the man in front of him. Missionary Russ Gordon closed the ceremony with the song “To God Be the Glory.” Spontaneously, the crowd stood to sing—giving God a standing ovation that night. 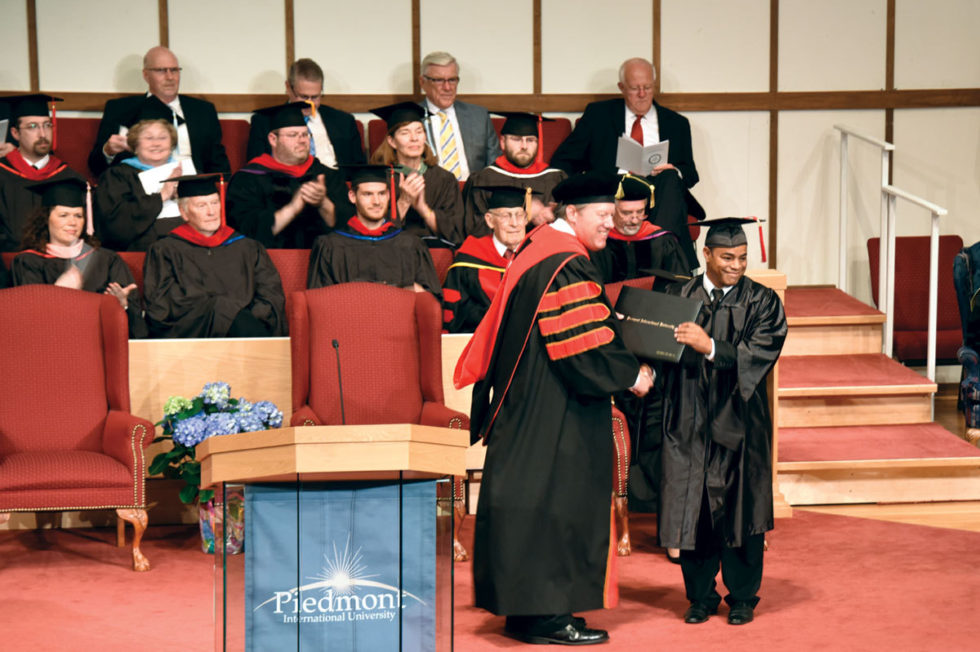